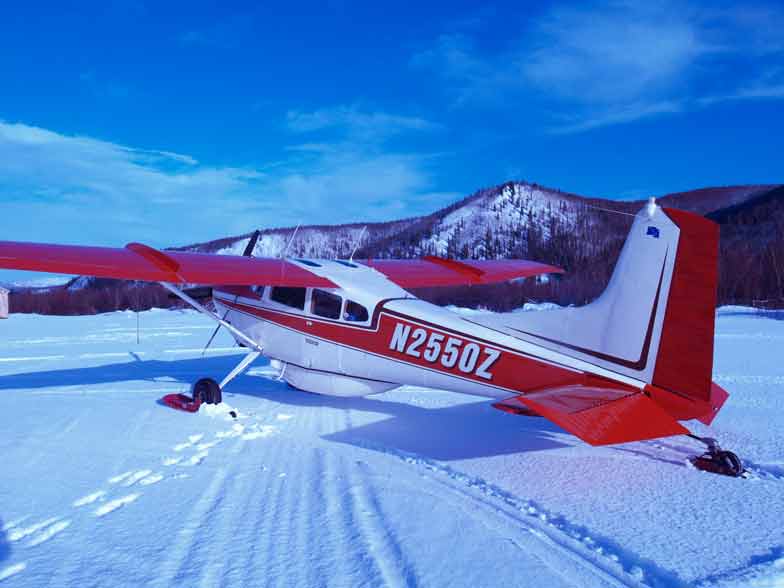 Check out these aircraft videos

The right of spring for many Alaskan's is the Iditarod Sled Dog Race. On the first Saturday each March, teams of one musher and 16 dogs each, head off on the Last Great Race, 1049 miles across Alaska, from Anchorage to Nome. Iditarod counts on thousands of volunteers to pull of the logistics needed to support a race across 1049 miles of Alaska winter wilderness, where there are no roads. The Iditarod Airforce and it's volunteer pilots are a key part.

Iditarod 2008. Diana flew the pre-race on the East side of the Alaska Range out of Willow. All the supplies were trucked to Willow this year to save Av-Gas. First days flying was is low visibility and the first causality was John Norris. Flying in heavy snow his induction iced up. John had to land in a swamp among Black Spruce trees. The minor damage turned in to over $15,000 when he found a stump had ripped the length of the belly, won't be fixed till July. The next week it was my turn out of McGrath putting in the remote Checkpoints. 40+ hours of flying and the Checkpoints were ready for 97 teams!

Iditarod started Downtown Anchorage Saturday the 1st of March with perfect weather. Sundays restart off Willow Lake was cold and sunny with thousands of spectators and snow machines lining the trail. 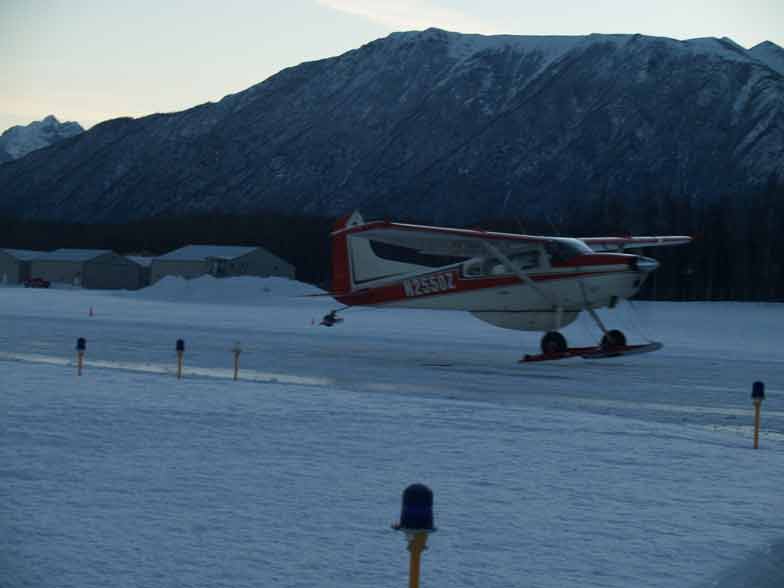 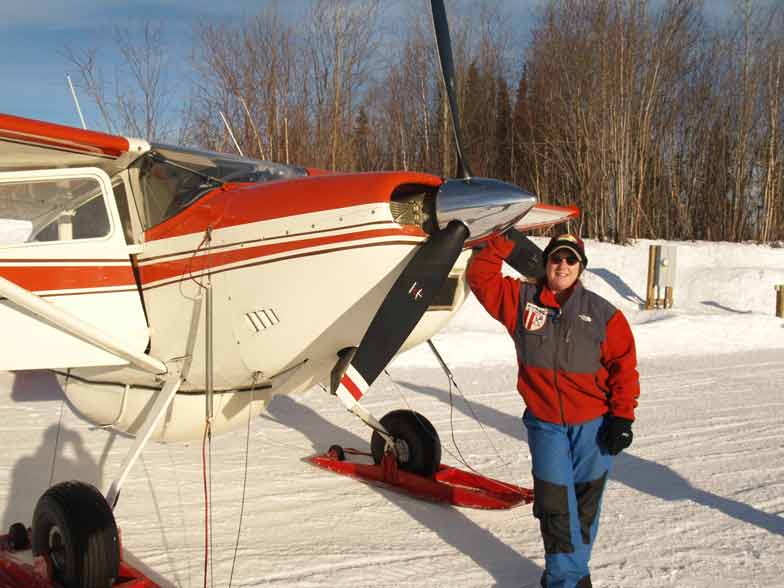 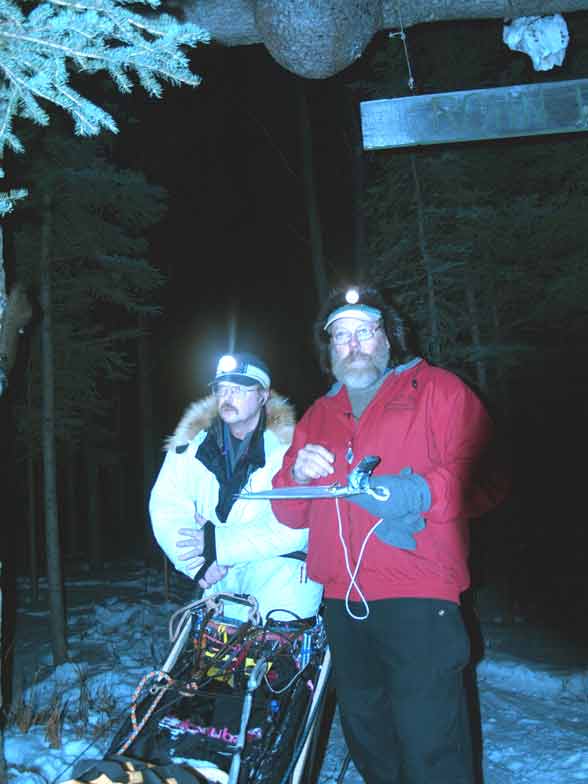 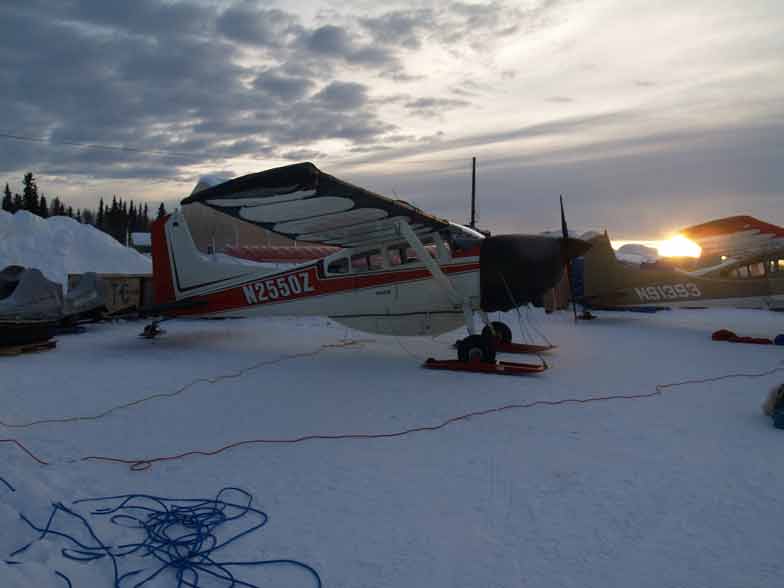 With so many teams and the extra flying it made for some long days. I managed to spend 3 nights at remote Checkpoints. First night at Finger Lake where the first teams arrive before sun-up. The second night Rohn where the first teams arrive before midnight of the second day and where I cook breakfast for all the volunteers Tue morning, they have been up all night. Then Iditarod at about day 5, the half way point to Nome, just to enjoy the race, the mushers and volunteers.

A typical day flying for the Iditarod Airforce evolves getting to the Checkpoint where the leaders were the night before and picking up the media folks and camera gear, dropping the tapes for transport back to Anchorage then media up the trail. Then we move Vets, officials, and other volunteers up the trail and any dropped dogs in from remote checkpoints so they can be flown to town. Most dropped dogs are just tired or have minor injuries they recover from. A few are more serious and require immediate attention. These dogs we drop everything for.

The days and the Checkpoints pass as the teams race to Nome and we fight the weather. Only one year did we flight the sun for the entire race and it was brutal, so bright even with sun glasses it gave you a headache. This year we had several weather systems with warm 32'f and low visibility and heavy wet snow.

A week in to Iditarod Diana flew to Unakleet took and over the 185 flying for a week. Diana battled the bearing coast winds and white-out conditions which claimed a second Iditarod Airforce aircraft this year. Crossing a snow covered ridge in white out conditions East of White Mountain,  Ken Moon caught a wing tip spreading wreckage for 200 yards. With himself and 2 passengers it was a miraculous  one was killed or at least severely injured, only minor bruises. In the industry it's called a CFIT accident. Controlled Flight in to Terrain. 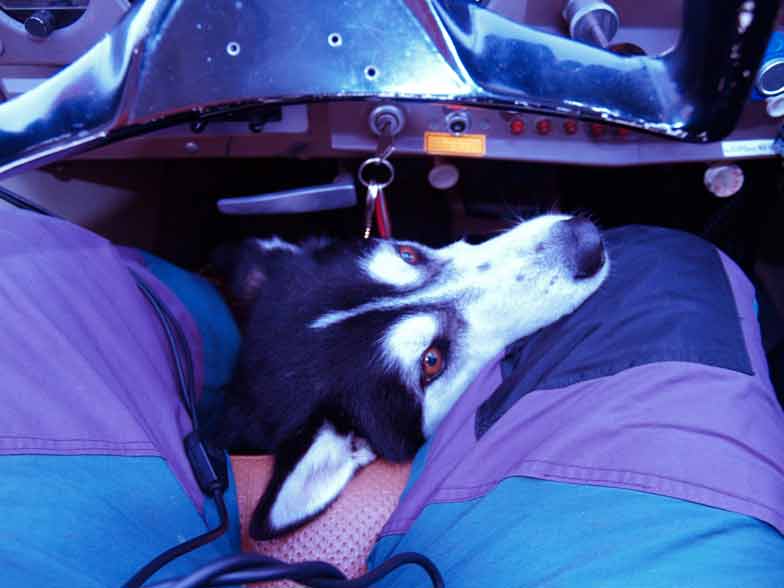 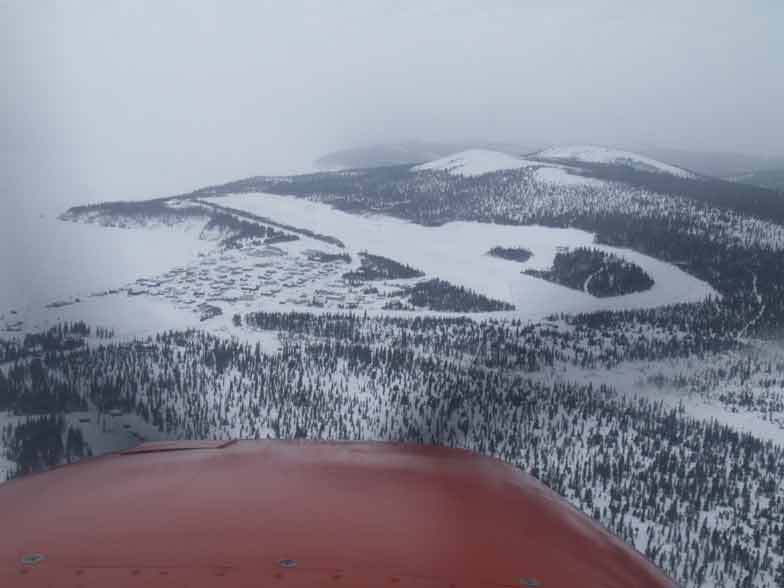 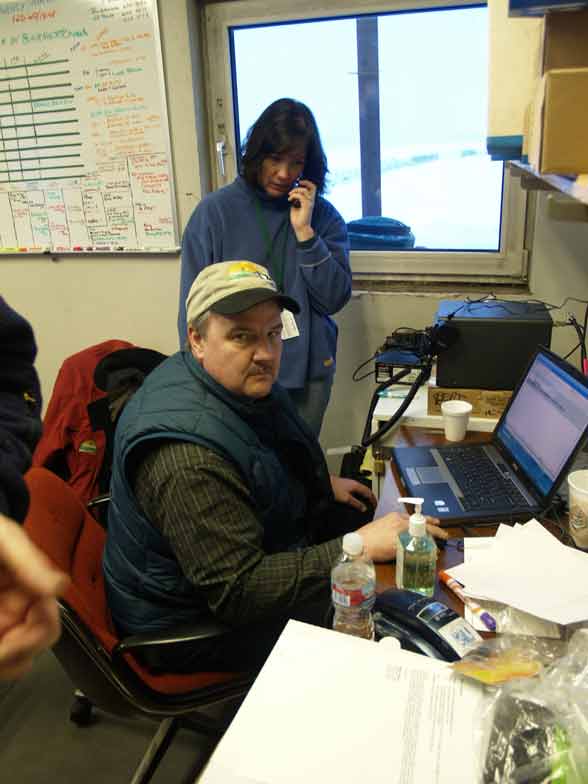 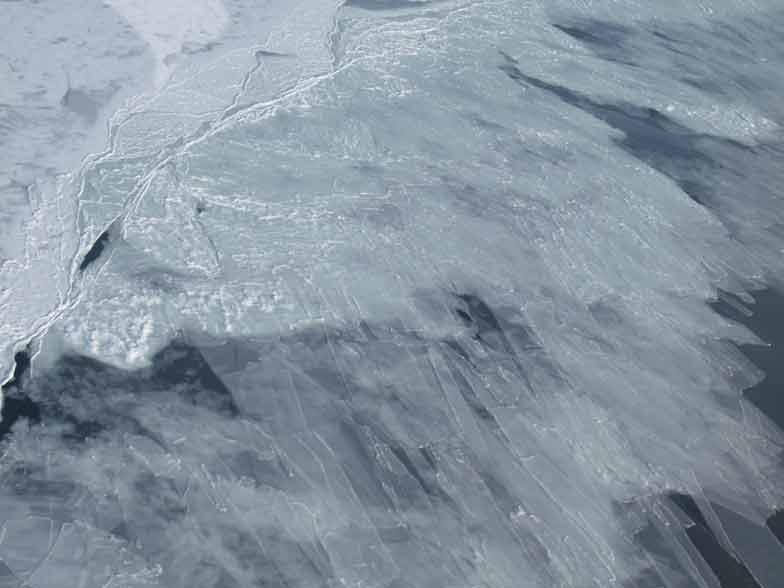 As Iditarod wound down and the last teams finished Diana and I and the other pilots took the time to enjoy fresh Bearing Sea King Crab, caught through  holes cut  in the sea ice. Diana return to Anchorage to work and I flew the 185 for the clean-up week. Bringing the vets and volunteers in to Nome as the Red Lantern Musher leaves the last checkpoints. There was little flying the last few days so Wes Erb and I flew out aircraft 80 miles North of Nome for a night at Serpentine Hot Springs. 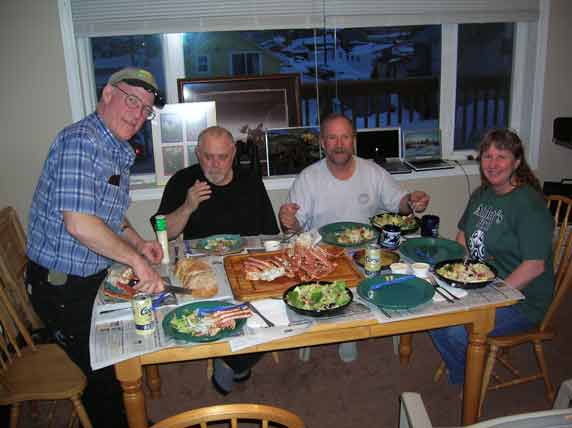 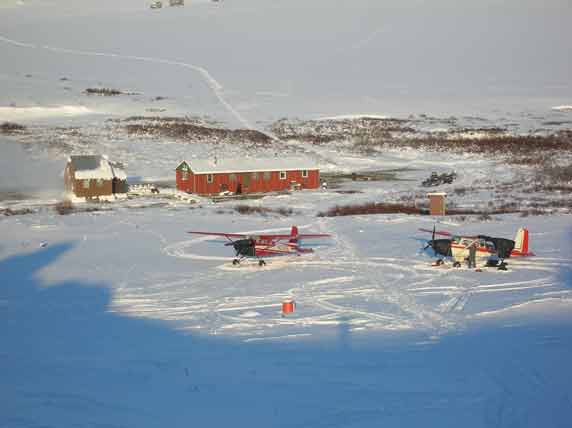 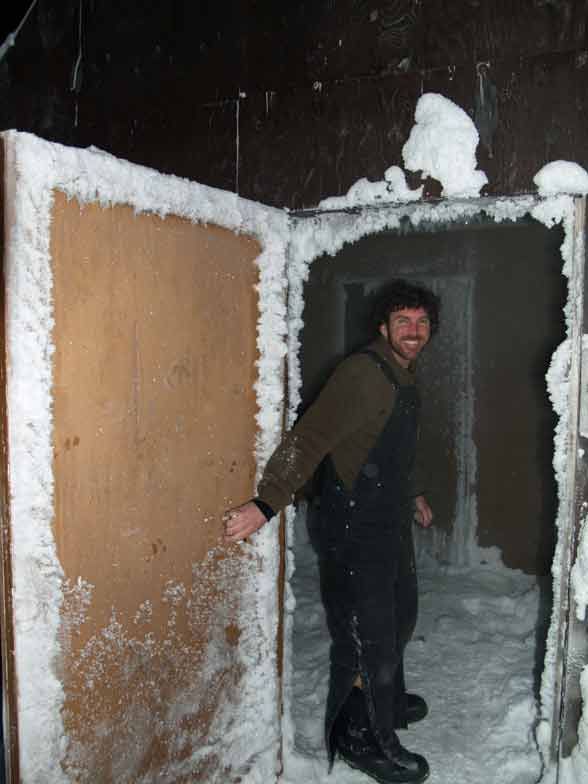 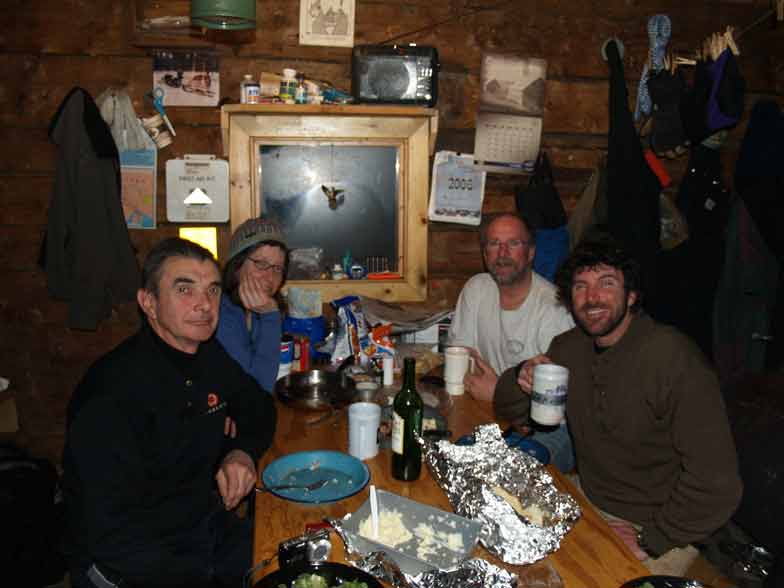 A record of aircraft accidents was another distinction for this years race. 5 Aircraft were damaged or destroyed. 2 were Iditarod Airforce and the others were commercial operators. Luckily there were no fatalities and only minor injuries.

Iditarod 2007:  February: Diana and I just this last weekend finished the engine upgrade on N2550Z in preparation for Iditarod 2007. The last few days Diana has been flying the new engine and running it in and making final adjustments. Skis will go back on this week and will be ready to fly support for another race to Nome.

This year we suffered through one of the coldest, windiest and toughest Iditarods I've experienced since I've been a part of the race from 1984.  Pre race flying wasn't too bad but from the race start till the finish, teams battled 0f to -30f temperatures and constant winds all the way to Nome. I've seen -50f but usually it doesn't last. To have the whole race cold and windy is unusually and it took it's toll with frostbite and scratched teams.

Iditarod 2006: Diana and I both flew our C-185 a total of 120 hours in 5 weeks in support of Iditarod. Two weeks before the Iditarod I began flying supplies from Merrill Field to Anchorage side Check Points. A week before the start Diana had the C-185 in McGrath supplying the middle Check Points. For the race start and the next 10 days it was my turn flying, hauling supplies, dogs and volunteers as the race progressed. By Unakleet Diana took over and flew the end of the race and cleanup.

About Us - Iditarod -Iditarod Airforce - Atlas Air - Skywagon  - On The Wing - Feedback
Site design and maintained by Bruce Moroney
bruce@alaskawings.com
This site was last updated 01/09/18